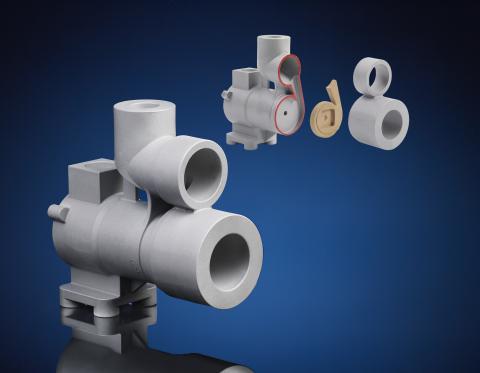 One of the special capabilities of the investment casting process is the production of castings with internalized features, passageways or undercuts.  O’Fallon Casting has four techniques available to produce internal detail:  mechanical tooling, soluble wax cores, pre-formed ceramic cores and imbedded pre-formed tubing.  We’ll expand here on each of these four techniques.

Hard tooling provides the most consistent quality and lowest cost so it is preferable that all part features be tooled mechanically when possible.  Generally undercuts can be readily hard tooled because, unlike with some other foundry processes, investment casting molds can be split like a “Chinese Puzzle” into smaller segments that can be removed from internal cavities without causing damage to the wax pattern.

Where a part feature cannot be tooled mechanically O’Fallon Casting employs two different types of cores that can be placed into the pattern mold to form the feature.  The most common type of core is commonly referred to as a “soluble wax core”.

For investment casting to produce any part feature it is necessary to build a minimum number layers of ceramic shell in or about that feature.  Being eliminated prior to the shell build, the use of soluble wax cores is limited to internal detail that can be fully formed by the ceramic shell.  To form features that are too small or deep to be produced directly by the ceramic shell a pre-formed ceramic core can be used.

Pre-formed Ceramics are processed similarly through pattern injection but differ from Soluble Wax Cores in that ceramic cores are not removed until after the metal has been cast.  Pre-formed ceramics are an excellent method to cast features but have the disadvantage of being expensive, brittle and sometimes difficult to remove from the casting.

For either Soluble Wax or Pre-Formed Ceramic cores to be cast for any extended length they will need to be supported at points along the core.  These “Core Supports” assure that a core stays in the correct position within the casting and also facilitates the removal of the ceramic from the part after it has been cast.  Once the ceramic has been removed from the interior of the casting the Core Supports can be closed either by welding or mechanically with a plug.  It is prudent to consult a foundry and receive recommendations for core supports before a design is finalized.

The forth option to provide internal configuration is with a pre-formed tube.  Unlike a soluble or ceramic core a pre-formed tube is not removed and remains imbedded in the casting throughout its life.  Pre-formed tubing is the most expensive option but it does facilitate the casting of a very long lengths of internal passageway.  For example, pre-formed tubes are often used to provide a passage for coolant to circulate through a casting.  For aluminum alloy castings a 300-Series stainless steel tubing needs to be utilized.

As with Soluble or ceramic cores a pre-formed tube is mounted in the pattern mold and the pattern wax injected around it.  The pre-formed tube must be of extremely accurate size and shape so that it does not “spring” when the pattern mold is closed upon it.  To prevent contamination, the open ends of the tubing need to be sealed.  Core supports are necessary to hold the tubing accurately in place but these openings need not be plugged as they do not imperil the integrity of the tube to conduct fluids.

Investment casting is a very versatile process with manufacturing options that impart a great freedom-of-design to Engineers.  The casting of cores and undercuts is one of the special capabilities of the process that can make designed products better.

If you have a question regarding the casting of a core or undercut, call your O’Fallon Casting Sales Enginer.