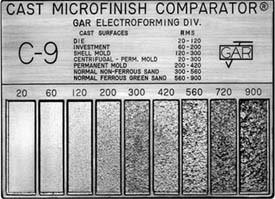 Because of these occasional incidents I argue against placing a surface texture requirement on a casting drawing unless the texture is important to the function of the part.  My thoughts are echoed in ANSI/ASME B46.1 Appendix B on the Control & Production of Surface Texture.  Appendix B1 states that:  “Surface characteristics should not be controlled on a drawing…” as “Unnecessary restrictions may increase production costs…”.  Since the surface texture of a casting is a function of a given foundry process, the options available to improve the native surface texture will entail some nature of secondary operation that will add expense to the cost of the product.

The occasional rejection of castings to a 125 RMS Max requirement is also in part explained by ANSI/ASME B46.1 where it states that “Castings are characterized by random distribution of nondirectional deviations from the nominal surface.”
ANSI/ASME B46.1 further states that “Surface characteristics of castings should never be considered on the same basis as machined surfaces.”  An inspection of an as-cast surface texture with a profilometer is in itself an inappropriate method for a foundry product.  The inspection of Surface texture as-cast surfaces should instead be performed by visual comparison to a standard.  GAR Electoforming (http://garelectroforming.com) manufactures a “C-9 Cast Microfinish Comparator” that can be used as a standard for visual and tactual comparison to a cast surface consistent with ASNI/ASME B46.1.  The use of this type of Comparator is highly recommended for the evaluation of an as-cast surface texture.

Overall it is recommended that a Surface Texture should only be specified on a drawing when it is important to the function of the end product.  The surface texture of a casting will be representative of its manufacturing process and it should be inspected visually to an appropriate surface texture gage.